Why can’t you just get “over it” ? How to tell when someone has recovered from an affair. 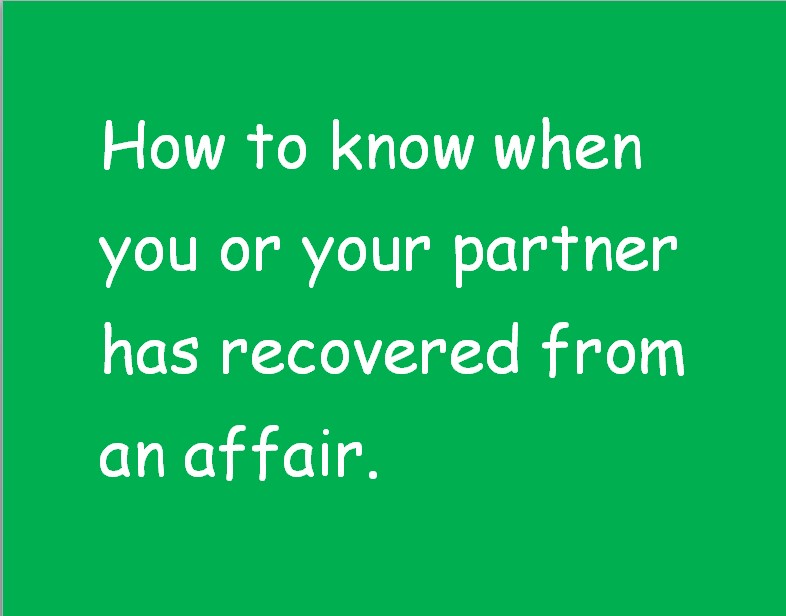 One of the most commonly heard laments when working with couples who have survived an affair is: ” Why can’t you just get over it and move on ?”

While the comment is usually made by the offender who is frustrated that his/her mate still brings up what s/he has done, the remark also raises a good question to which many folks don’t know the answer.  So, today let’s talk about what has to happen emotionally for one to “get over” and “move on” from betrayal and how one can tell when it has happened.

To begin, it is important to understand what “getting over” an affair means in psychological terms as well as simple behaviors.  Obviously, affairs damage trust  and the sense of emotional safety for the one who is betrayed.  Behaviorally, the wound is expressed by obsessive thoughts, comments and questions about the affair directed to the one who strayed.

The time it takes to heal the emotional wounds created by an affair to heal and for the obsessive thoughts to subside depends on a number of factors.   1) The nature and duration of the affair ; 2) The offended partner’s prior history and experience with betrayal and 3) The overall quality and strength of the couple’s relationship.  Because of the complexity of healing process, predicting exactly how long it will take to recover is impossible to calculate and, as  is often said, it takes as long as it takes.  However, if both partners are sincere and committed to rebuilding their relationship, working with a therapist can accelerate the healing process as well as address other underlying issues necessary for a lasting reconciliation .

That said, an important part of the infidelity equation which is often over-looked is how to know when the one who was unfaithful is “over” the affair and has “moved on”?  Faithful and consistent  behavior by the offending spouse is certainly a major indicator that things have changed for the better.  However, a common indicator that the one who had the affair is not over it is that when questions of why can’t the other spouse stop talking about the past and move on is spoken with anger impatience and exasperation.

For the one betrayed , emotional healing is all about the ability to trust that what her/his spouse is saying is real. When the person is believed, the tone of the comments and questions changes and the anger is dramatically reduced. Likewise , a dramatic increase in the ability of the offender to listen and to hear comments and questions occurs.  One crucial indication that the offender is NOT  over the affair is the eruption of anger which happens  even at the mention of the incident or relationship.  The ability of the one seeking forgiveness to express empathy for and understanding of the impact that  his/her behavior has had on his/her mate is the acid test that a person is more concerned about his/her partner than the amount of time it is taking .

Neurologically, both the obsessiveness to discuss and the anger aroused by discussing the affair come from the panic arising in the amygdale. The amygdale, which keeps watch for threats, sends out a panic alert when danger is detected. The exposure of an affair is accurately interpreted as a real and present threat to the the survival of both members of the relationship. The anger/panic response, however, is instinctive and disconnects the person’s access to the neo-cortex and thus the ability to reason or have empathy or concern for another person.  Being able to hear and discuss unpleasant matters, as well as having  the ability to express concern for the well being of the other, demonstrates that access to the neo-cortex has been re-connected and is functioning.

This demonstrated ability to show concern without rancor  is what “getting over it” and “moving on” means and behaviorally looks like in action.  Indeed, before couples can truly learn and grow from the disturbance of an affair, both must be able to calm the panic and relate to one another from the pre-frontal cortex. The good news is that, when both partners have the desire , the panic and anger can be calmed , real change can be made and that  marriages and relationships can not only survive but thrive after the trauma of an affair.