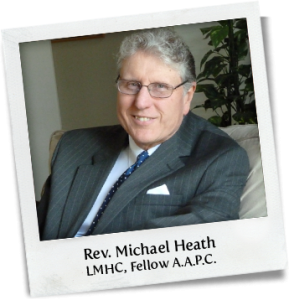 For your convenience and safety, all counseling is provided via Tele-therapy.

Hi! I am Michael Heath and this is the Pine Ridge Pastoral Counseling Web Page. Pine Ridge is a place for folks who are looking for the best mental health care but who are turned off by large clinics or impersonal facilities.

Since 1994, Pine Ridge has offered a distinctive and more personal alternative for mental health needs while providing a comprehensive range of psychological services to help individuals, couples and families deal with a wide range of emotional, relational, crisis related, life phase and spiritual problems.

Since I am both a state Licensed Psychotherapist and a nationally Certified Pastoral Counselor, I offer a comprehensive therapeutic approach which can relate to both the psychological and spiritual dimensions of life’s difficulties .

This web site is a great place to learn about my areas of expertise and to find answers to questions you may have concerning psychotherapy, marriage counseling, couples counseling, and other counseling related issues. If you can’t find what you’re looking for, please contact me and I’ll be glad to help.

Helping the people of Central New York since 1978 with: 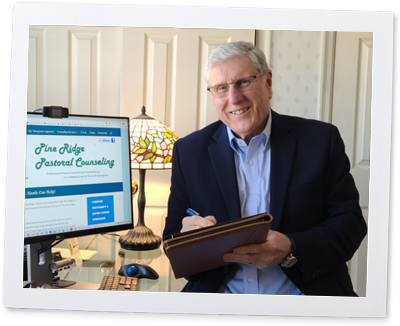 As a result, all insurance co-pays, co-shares and deductibles for behavioral health services, which were previously suspended under the State of Emergency, will be reinstated. Please consult your insurance carrier for the details of your policy.

Despite this change, due to the increasing risk of the Delta variant, all counselling sessions will continue to be conducted via tele-therapy until further notice.

Recently, I wrote about the problem of false guilt and shame which can interfere with a person’s ability to think clearly and relate rationally to others.  False Guilt and Shame | Pastoral Counseling Syracuse NY (revmichaelheath.com)

Today I want to talk about shame and guilt about sex and the major source of these destructive feelings, i.e.  traditional religious teachings about sex and pleasure.  Over the centuries, traditional Roman Catholic and Protestant doctrines have caused of a lot of needless stress.  And, as hard as it is to believe, they continue to be a source of pain for many.

From a psychological point of view, traditional Christian beliefs viewed normal sexual feelings to be in conflict with God’s law and, therefore, sinful.  Thus, lacking positive teachings about sex, natural desires evoked feelings of sinfulness and even self-hatred.

Those who suffer with this conflict need to know that this antipathy was not always the case.  It is important to understand the evolution of Christian thought and how the delights of sex found in Song of Solomon were squelched and replaced with negative views.

While complex, two major developments are largely responsible for this change:  1) apocalyptic expectations. and 2) The disappointment of those expectations experienced by the delay of the Jesus’ 2nd coming (the Parousia). Let me explain,

END_OF_DOCUMENT_TOKEN_TO_BE_REPLACED 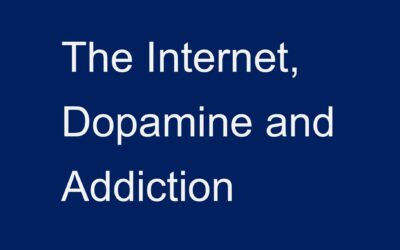 The Internet and Addiction

Today, I want to discuss how frequent internet activity triggers dopamine release in the brain and may lead to addiction. Specifically, I will explain how excessive time on a smart-phone use can hook its unsuspecting users .

Although addiction is an age-old problem, smart-phone technology presents a new risk .  Research has confirmed the problem that parents and unhappy spouses have struggled with for years: How to get members of their family to put their phones down?

To better grasp the risk that smart phones pose for addiction we need to understand 1) Some basic neuro-chemistry.  Particularly how dopamine creates addictive behaviors. 2) How folks can become addicted to their smart phones. 3) How to tell if someone is addicted to their phone. and 4) Successful treatment strategies for smart-phone addiction.

END_OF_DOCUMENT_TOKEN_TO_BE_REPLACED 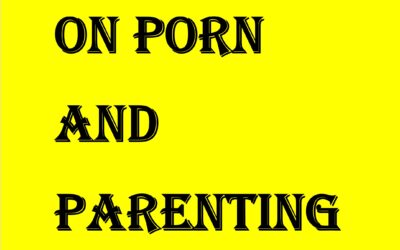 Few would disagree that omnipresent internet pornography harms children and poses a difficult challenge for parents. That said, many who oppose it don’t understand the real damage that it does.  Worse, many of the common approaches exacerbate the problem or interfere with open communication .

END_OF_DOCUMENT_TOKEN_TO_BE_REPLACED 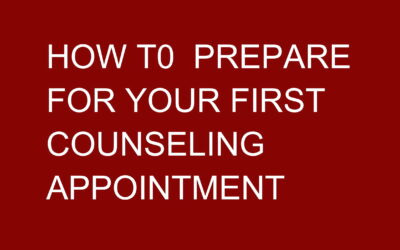 Before Seeing a Therapist

Recently, I received a questionnaire from my new doctor in advance of my annual wellness exam and this got me to thinking: Why not do the same for my new clients ?

In the past I’ve written a number of articles which try to explain what counseling is. Becoming Reasonable: Updating our Notions of Mental Health and Counseling. (revmichaelheath.com)  Likewise, there are many books and articles which explain what to expect from counseling but not a lot which help you to mentally prepare for your first session. –What to Expect from Therapy | JED (jedfoundation.org)   Many wonder if it is okay to just show up?

Although many folks do come in for their first session unrehearsed, I have found, over the years, that it’s helpful for a client to take a little time before the first appointment and ask themselves some basic questions about what it is that is bothering them.

So, today’s segment is just that, some things for folks to consider who have never gone to counseling before and who are a little uncertain about how to proceed.  After all, it is intimidating to sit down with a complete stranger and talk about personal and even embarrassing problems. How does one begin ?

Reflecting on what’s bothering you not only helps to calm the jitters but it also can provide an important context from which the issue emerged.  This wider perspective is necessary for the counselor to accurately assess and treat what is of concern to you.

Here are some questions to ask yourself which can help you clarify / communicate your experience to your counselor and help you get started:

END_OF_DOCUMENT_TOKEN_TO_BE_REPLACED 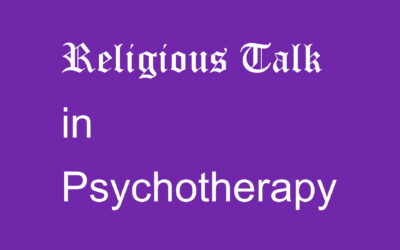 There was a very interesting article in the Washington Post recently about how more and more therapists were opening their counseling approach to include religious beliefs and concerns. More psychotherapists are incorporating religion into their practices – The Washington Post

First off, it is important acknowledge and to understand why religious language has been a problem for some therapists in the past.   Even though cultural sensitivity and inclusiveness has increased toward race, gender and sexuality, spirituality has been neglected.  One reason stems from the fact that American culture is predominantly secular.  For example, in contrast to the ancient Europe,  Americans build sports stadia and skyscrapers, not cathedrals. Statistically, fewer people now worship than ever before in America (less than 50%).

Another contributing factor to psychotherapy’s awkwardness towards spirituality is psychology’s open hostility to religion. For example, Freud skeptically referred to it as “mass hysteria”.

Not surprisingly, therapists tend to be less religious than the general population. Many openly acknowledge feeling awkward when encountering clients who espouse a faith or employ religious language when explaining their concerns.
Psychology’s antipathy to religion is not a secret. Not surprisingly, many clients report feeling self-conscious about their faith and sometimes are reluctant to speak of their spiritual concerns in therapy for fear of appearing “religious”.

All of this notwithstanding, it is important that clients and therapists, alike, understand that neither needs to be uncomfortable when discussing matters of spiritual or religious content. It is my belief that much of the tension between psychology and religion stems from a fundamental confusion about their roles.

END_OF_DOCUMENT_TOKEN_TO_BE_REPLACED 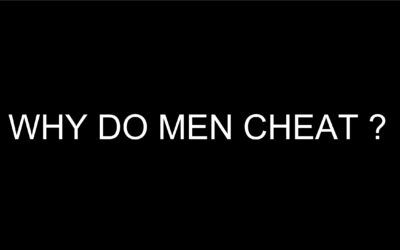 WHY DO MEN CHEAT ?

Why do men cheat ?

I suppose, to be fair, that one should ask why do people cheat. That said, statistics show that, after the age of 25, men do tend to be more unfaithful to their spouses than women.   And, as we age, the disparity increases.  After age 60, the percentage of women’s extra-marital activity begins to decline while men’s continues to increase until age 70.

Gender differences aside, the real question is: Why is it so difficult for people to be faithful to one another in marriage ?  While the question is complicated, there are some things that we do know.

First. there is no one reason that people have affairs.  Some folks have a trauma-based sexual compulsion. Others, use sexual conquests to calm anxiety issues, similar to the way some use alcohol, drugs, gambling etc. Still others have affairs out of sheer boredom or lack of meaning in their lives or relationship.

Apart from these general distinctions, there is a myth which confuses our understanding of affairs. Many folks believe that sex is the prime reason people cheat. While the thrill of new sexual experience is a part of the attraction of affairs, research shows that that sex is not the primary motivation.  Why do People Cheat Even When in Happy Relationships? (simplepractice.com) Let me explain why:

END_OF_DOCUMENT_TOKEN_TO_BE_REPLACED 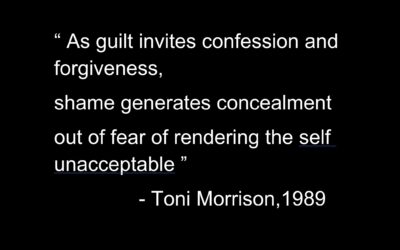 Psychologists write a lot about guilt and shame. Shame vs. Guilt – Brené Brown (brenebrown.com) False guilt and trauma induced shame are two of the most emotionally destructive experiences felt by clients and challenging for therapists to treat.

Despite their notoriety, folks often confuse their meaning. Guilt-Tripping and Emotional Manipulation | Pastoral Counseling Syracuse NY (revmichaelheath.com)  For example, it is common for people to use the terms interchangeably.  In fact, their meanings are quite different.

Today, we’ll highlight the differences between guilt and shame and suggest ways to deal with and reduce their impact.

END_OF_DOCUMENT_TOKEN_TO_BE_REPLACED 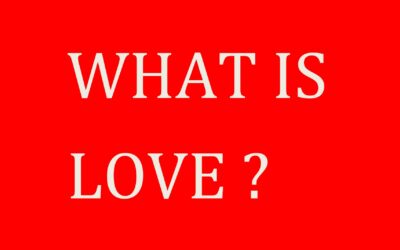 Has there ever been a word more written about than love ?

Everyone seeks it. Most folks think they know what it is. But, ironically, couples often worry about if they are loved or if they are able to love .

Over the centuries, no one has improved on what St. Paul had to say about love in I Corinthians 13.4-7 (rsv) :

”  Love is patient and kind; love is not jealous or boastful; 5 it is not arrogant or rude. Love does not insist on its own way; it is not irritable or resentful; 6 it does not rejoice at wrong, but rejoices in the right. 7 Love bears all things, believes all things, hopes all things, endures all things.”

St. Paul is clear about what love (agape) is in relation to a friend or neighbor. However, when love is understood in the context of marriage, it is a little more complicated.  The intimacy of a committed adult relationship adds the elements of sexual passion and desire.  Navigating and balancing concerns for one’s beloved and for oneself own can be challenging and confusing. Is It Love or Chemistry? Tips for knowing when real love comes along. | Pastoral Counseling Syracuse NY (revmichaelheath.com) To make matters even worse for couples , many of the romantic myths, found in popular literature and media, have created unrealistic expectations about relationships which distort many folks’ understanding of love. Here is an approach that can help us to sort it all out .

END_OF_DOCUMENT_TOKEN_TO_BE_REPLACED 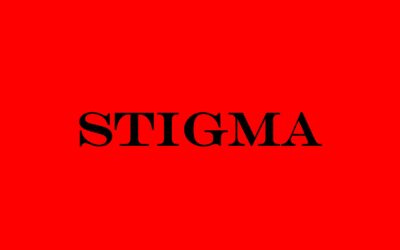 There is good news for those who worry about the stigma associated with mental health.

The amount of stigma surrounding counseling is much less than it used to be.  When I first started counseling in the late 70s, some men would not schedule appointments during daylight hours for fear of being seen going to a counselor’s office.

Although attitudes have improved, many people still view getting help with emotional problems as embarrassing or even shameful. In large part, this discomfort is due to certain lingering myths about mental health. Common myths created misunderstandings about psychological disorders and their treatment. Here are some common notions which are misleading and or false:

END_OF_DOCUMENT_TOKEN_TO_BE_REPLACED

For more recent and past Mental Health postings, visit our Blog archive.