Updating the Image of Psychotherapy: It’s More IT than Freud 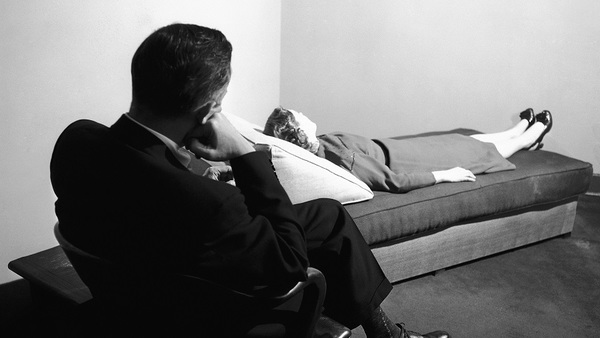 What images come into your head when you think of psychotherapy or seeing a counselor ?
I hope it’s not something like the picture above left . Indeed, a more accurate image is  a person working at a computer with an IT specialist.
Many of our images of psychotherapy are really misleading caricatures which come from practices that are well over a hundred years old. Although many changes have occurred concerning our understanding of the mind and how best to treat emotional problems, many folks still imagine that counseling is something that involves lying on a couch while trashing our mothers. Frankly, it is time to update both our imagery and understanding of modern psychological treatments and explain their fundamental assumptions.
Traditional notions of therapy are misleading in several ways:
For one, they give the false impression about the nature of the relationship between the client and the therapist, i.e. that the person seeking treatment must give over control to the therapist and it is the doctor who is in charge. Freudian psychoanalysis brought a revolution to psychiatry by theorizing that mental illness could be cured by raising awareness of conflicted, unconscious aspects of a person’s life. Being more mindful of the sources of emotional conflicts could allow clients to consciously understand how to resolve them.
That said, traditional analysis placed way too much emphasis on the past, sex and early childhood traumas and too little on the harmful effects of contemporaneous trauma and stress. Although modern psychotherapy also helps to increase a person/s awareness of how important trauma in a person’s life are connected and have created disruptive and dysfunctional response patterns, it approaches those traumas from a much more direct and educational perspective than older versions.
Another term which is widely misunderstood and a cause for confusion is the word “unconscious”. In years gone by, the unconscious was never really understood but was seen as a mysterious and almost ghostly aspect of the human mind that contained information that would solve emotional problems. At first it was thought that hypnosis could access the unconscious and then the technique of free association could unlock the secrets of the mind. Dream analysis also was a major component of therapy in which the symbolic elements of a person’s dream could be identified and decoded.
Today, the notion of the unconscious is understood, not as a thing or an aspect of the mind, but as simply as a lack of awareness about one’s self, i.e. that history or pattern or connection in one’s life of which one is not aware or mindful. For example, a person may become depressed or have tears about the same time every year and not know why. When, with the help of a therapist, s/he realizes that the time of year is when a loved one died, s/h becomes less unconscious and more conscious of an important moment in her/his past that still affects him/her.
A third aspect of modern therapy, which differs dramatically from the old-style, is the nature of the exchanges which take place between client and therapist in the therapy session. Freudian style therapists were largely silent and nodded from time to time while the client would free associate. The therapist’s role from this model of treatment was to speak little and then only to make interpretations about or connections of important comments.
Today, therapists engage the client in a more natural dialog wherein the counselor seeks to understand what the client is expressing and reflects their understanding back to the client. Establishing an empathic connection is a primary step to raising consciousness and mindfulness.
Finally, modern psychotherapy understands nature of psychological disorders which are responsible for most mood disorders like anxiety and depression much differently than it was understood in the past. The majority of clients, rather than being seen as suffering from a persistent mental illness, are understood to have experienced the disruptive effects of emotional trauma.
Much of psychopathology today is likened to an electrical circuit that has blown or an internet server that has goes down. Studies have shown that various forms of trauma can temporarily disrupt neuro-pathways to higher brain operations which provide judgment and perspective. Indeed, a better image and a more fitting metaphor of psychological disorders is that of a computer which has lost its connection to the internet.
The next time you think about counseling, instead of lying on a couch, think of working with an IT guy or gal to get your computer back up and running. No stigma. No mystery. Just important help when you need it.
Rev. Michael Heath, LMHC, Fellow AAPC