Updating our Understanding of Suicide 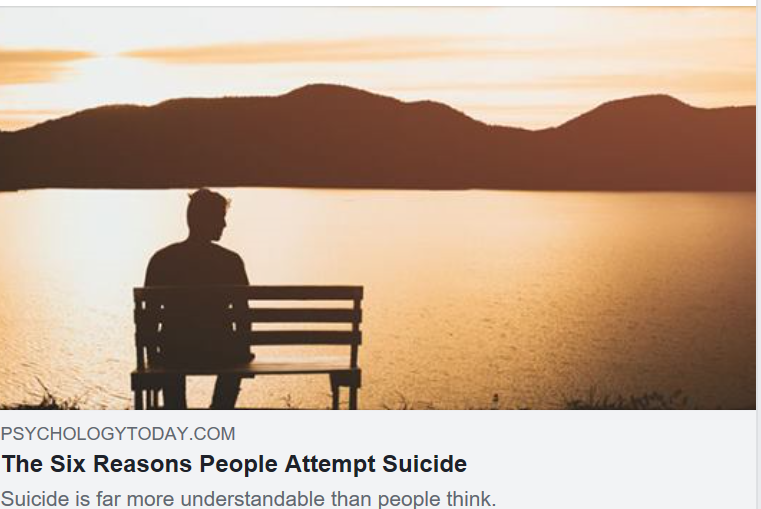 In the wake of two celebrity suicides, the media is filled with commentary regarding why people , especially successful people, do it. http://wjla.com/news/nation-world/more-than-a-mental-health-concern-nationwide-increase-in-suicides-prompts-new-questions.  It is unfortunate that the public eye only turns to this tragedy when it involves a famous person.  Indeed, despite various efforts to lower it,  the suicide rate is climbing at an alarming rate* in America. https://www.nytimes.com/2018/06/07/health/suicide-rates-kate-spade.html

Also troubling is that a death of someone like Anthony Bourdain demonstrates, even when it looks to others like an individual has everything in the world going his/her way, no one ever really knows the inner turmoil or demons with which folks struggle.  Having inner turmoil is one thing but obviously everyone who has turmoil doesn’t  kill themselves.  Why  people commit suicide is complicated but one wonders , do you have to be “crazy” to kill yourself?   Rather than one explanation of why people commit suicide, an article from Psychology Today  list six rationales. https://www.psychologytoday.com/us/blog/happiness-in-world/201004/the-six-reasons-people-attempt-suicide

Among the six reasons identified, three exhibit some type of psychiatric/medical problem, two are unintended and one is a reasoned choice (Frankly, I am very uncomfortable with even calling a reasoned choice to end one’s life for philosophical reason “suicide”. Those who wish to choose death with dignity are not mentally ill or out of touch with reason and thus should not be lumped in with those who are. But that is a topic for another discussion.)

Thus, excluding those who reasonably plan their own death, every other cause contains a significant element of irrationality.   Even for the unintentional or accidental type, there is a serious lack of reason and judgment present enough to impair cognitive functioning and reasonable behavior.  So yes, it is my belief, most victims of suicide are crazy, i.e. have significant mental disorders.

An important fact to keep in mind however, is that “crazy” is not an all or nothing thing. Mental disturbance is a relative condition which lies on a continuum from mild to severe.   That fact understood, a question still lingers: How disordered does a person have to be to commit suicide ?

While many folks have thoughts of death or killing themselves when distressed, these thoughts are transient and do not pose a serious threat.  Only in people who have persistent irrational thoughts and dysphoric moods is the risk significant.

Going forward, it is important to learn important lessons from celebrity suicides and take advantage of the public spotlight  to educate and  advance public understanding of mental illness and those who are vulnerable to suicide. We all are a little bit crazy in that there are times that we act in irrational ways but that does not mean that we are either diagnosably disordered or at risk for suicide.

When trying to assess whether a disturbing thought or feeling represents a real problem ( for yourself or a loved one) here are some simple questions to ask:

If the answers to these questions are: 1) Frequently, 2)  Very and 3) for more than a few days, 4) A lot – it is a good idea to seek professional advice.

Sadly, even in the 21st century, fear and stigma prevent many from seeking professional help.  There are two persistent fears stemming from a fundamental misunderstanding which create the avoidance. One is about the very nature of psychiatric disorders viz., that it shameful and incurable condition. The second is the fear having any “crazy” thought means that one could go mad and become like one of those grotesque caricatures of the insane found in horror movies.

What needs to emphasized are the facts that psychotherapy  and medication can successfully treat most emotional disorders and prevent tragedies.

Increased understanding and discussions are needed to correct these erroneous notions and to reassure the public that having unreasonable thoughts and impulses from time to time is normal and does not mean that one is or is going crazy.   The goal must be to help folks feel more comfortable with mental health issues and to more readily seek out mental health professionals when there a troubling emotional question arises – just like they would a physician for a medical concern.

But, understanding is not enough.  Our health care system is inadequate. Broader  coverage and access needs to be provided for low income populations. https://slate.com/technology/2018/06/after-kate-spades-suicide-people-are-sharing-crisis-hotline-numbers-but-americas-mental-health-care-system-is-still-broken.html

With more understanding and accepting attitudes regarding of mental health problems, as well as better funding for mental health resources, tragedies like suicide can be greatly reduced.