The Absense of Empathy: Psychology’s Take on the Origin of Sin and Evil. 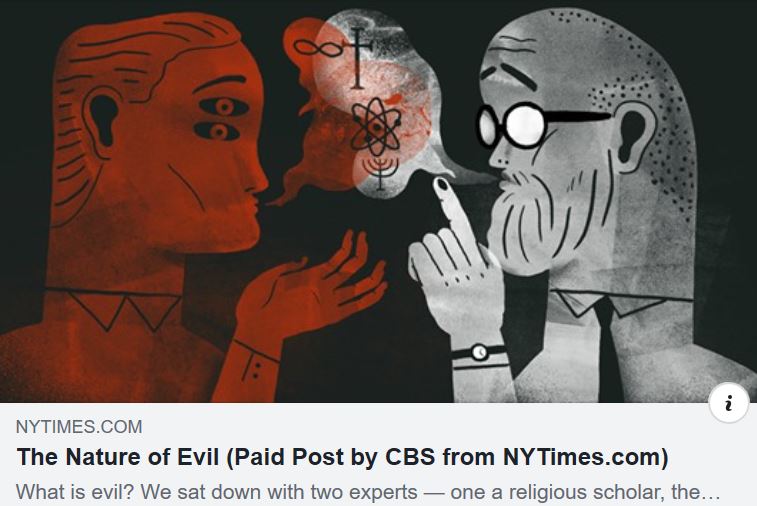 The incessant reports of gun violence has stimulated deeper questions about the very notion of human sin and evil.  A recent report in the New York Times interviewed a theologian and a psychiatrist about their understanding of these mysteries. https://www.nytimes.com/paidpost/cbs/the-nature-of-evil.html? cpv_ap_id=50028920&sr_source=lift_morein&tbs_nyt=2019-September-nytnative_morein.
As one who is an ordained minister and also a licensed psychotherapist, I found the discussion fascinating and relevant to modern concerns about why bad things such as mass shootings happen. Further, the dialog provides a good example of the kinds of issues  with which pastoral counselors often deal and how they function to translate psychological concepts in to more familiar religious ones.
Specifically, the psychiatrist expressed the widely held view of how modern brain research and psychology understands the concepts of evil and sin. This evolving bio/psycho/social perspective provides a different slant on traditional religious views of evil but, ultimately, is congruent with the fundamental message of biblical beliefs. Here is a look of how science informs and relates to theological concepts.
Brain science can be complicated but, basically, it holds that individual evil can be seen as a psycho-pathology which is caused by a genetic malformation in the brain, an environmentally based trauma or a combination of the two.
Psychologically, human evil is defined as psychopathic individuals who have no concern or empathy for the negative impact their behavior has on other individuals or society as a whole.
Sin, which can be seen neurologically as a loss of impulse control, results because of a disruption in or destruction of vital neuro-pathways to the neo cortex of the brain. The result of this neurological obstruction is that the person is controlled by the animal-like instinct-based amygdala/limbic system in the brain rather than the human part of the brain.
Seeing evil, medically, as the result of a pathology in the brain has significant moral implications with regard to the religious notion that sin is a free choice. Science, however, offers another way to understand evil and sin which does not conflict with biblical concepts but is not volitionally based.
Sin may be understood as the inability to trust which has resulted from a psycho/physiological malformation or wound. For example, Adam and Eve’s sin was an inability to trust God.
Apart from genetic malformations, humans have difficulty trusting because of the way the human brain has evolved. The human part of the brain, the neo-cortex, developed over time as an add-on to the more primitive instinct-based and anxiety-ridden part called the limbic system. The cortex has capacity for logic, language and can think. It also has empathy for others and can love. In other words, the part of the brain which differentiates us from animals and makes us truly human is not simply our intellectual faculties but also our capacity to love and care about others. That said, the thinking /loving part of our brain co-exists with the instinctive/anxiety driven part and therein lies the problem.
Under stress and trauma, the limbic system can hi-jack the cortex and fear/rage takes control , overriding and disconnecting a person from their reasonable / civilized faculties. And here is a crucial difference which diverges from traditional understanding of sin: The temporary limbic takeover of the brain is not initially within voluntary control. It is reactive or neuro-reflexive and does not involve conscious thought or reasonable choice.
In other words, unlike a traditional, volitional understanding of sin, a scientific view sees unloving behavior as the consequence of fear and panic which blocks our capacity to love. We don’t choose sin. Sin (selfish, non-empathic, irrational, instinctive behavior) takes us over.
In extremely rare instances, organic malformations in the brain render an individual incapable of empathy from birth. In these situations no effective treatment is available. More commonly, however, trauma causes the loss of the ability to empathize and act rationally. When the underlying source of the panic is identified and calmed through treatment, neural connection to the cortex is re-established and a person is then free to act in loving and kind ways again.
Understanding that sin is a consequence of trauma does not resolve the ultimate mystery of its existence but it does provide a more compassionate and less judgmental way to approach it . Rather than appealing to morality or personal character, more attention must be paid to understanding and addressing the underlying stresses which have interrupted empathic sensitivity and impaired rational decision making.
For a vast majority of conditions, medication and psychotherapy can dramatically help individuals to heal from their trauma and regain the capacity to trust, feel secure and, in turn, act more lovingly. The good news, expressed in the terms of faith, is that with a combination of spiritual support and professional treatment, progress in reducing sin is possible.
Rev. Michael Heath, LMHC, Fellow AAPC 9 16 201
Image acknowledgment and attribution : https://www.nytimes.com