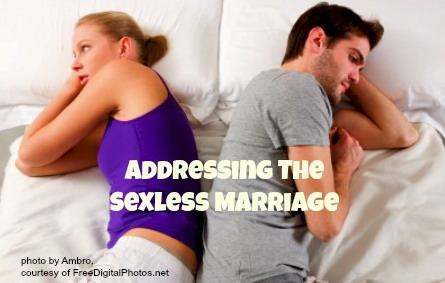 Recent studies have repeatedly shown that Americans are having less sex.  One statistic reveals that over half of single folks under forty haven’t had sex in a year.  Factors such as work-related anxiety and financial worries leave many singles either too busy or too stressed out to bother with sex.

Shockingly, more and more married couples are reporting that they aren’t having sex either.  Sexless marriage hasn’t been talked about much in the past but, lately, it’s attracting more clinical attention  because the fact that couples aren’t having sex is being acknowledged  more frequently by patients who are seeking help for other issues.

Sadly, many sexless couples don’t seek help because they are discouraged and feel that there is nothing that can be done.  Unfortunately, untreated, the problem only  becomes worse.   While sex may not be the most important thing in life, it’s probably in the top ten.  Therefore, couples need to know that sexual problems in marriage, while difficult to talk about at first, are very treatable.   Here are some important facts about sexless marriages:

What is a “sexless” marriage ?  To begin, a sexless marriage does not mean that a couple never has sex.  Statistically, while the frequency that folks have sex varies a lot, partners who have sex only  few times a year (e.g. 10 times or less)  are considered to be sexless.  Couples who have sex more than 10 times but less than 24 most likely have sexual intimacy problems but are not classified as sexless.

Work and Financial Stress, Fatigue and Over-loaded schedules. In order to enjoy and have good sex a person needs to be relaxed, well rested and have the free time.  It is normal for many young families who are struggling financially or who have a new baby to have less sex but … not to be sexless.  If sex has become a rarity in your marriage it’s time to admit it and to seek help.

Physical and Medical Factors.   Certain medical conditions which limit physical agility or which are medically proscribed preclude normal sexual activity. Likewise, other conditions make sexual intercourse painful or frustrating.  However, just because a person may not be physically able to perform sexual intercourse does not mean that the couple cannot enjoy sex.  Sometimes, talking with a therapist can help partners discover other ways to pleasure themselves which is mutually satisfying . Also, if pain during sex is a problem, although it may be embarrassing to talk about, a visit to one’s doctor may provide dramatic relief.

Depression, Anxiety, Resentment.   Neurologically , clinical depression can suppress libido and the desire to have sex.  Also, too much anxiety can distract and overwhelm a person to the point of not being able to focus on sex. But by far,  the most common obstacle to good sex is resentment which has either built up over time from unresolved minor problems or due to major problems (like alcohol or affairs) where needed changes aren’t forthcoming.  It is important to know that passion and anger are on the same neurological  circuit  and that when anger is aroused, passion is blocked.  Talking with a therapist can allow unexpressed frustrations to be safely ventilated and allow natural desire to return.  Where the absence of sex is the consequence of a more serious problem, more fundamental change may need to take place to repair intimacy.

Sexual Trauma and PTSD Sometimes repressed sexual trauma from the past can re-surface in a person’s consciousness and make certain aspects of physical intimacy unpleasant or worse.  Again , seeing a therapist can help both partners understand what the problem is and start a treatment which will deal with the unhealed wounds of the original trauma and help the couple to develop a loving and reassuring approach to pleasuring one another in a non-distressful way.

Embarrassment and Poor Communication. Because of repressive cultural and religious norms, talking about sex openly is frowned upon by many people.  Likewise, getting past embarrassment can be difficult.  As a result, many sexual problems which could be easily be resolved go untreated because people are reluctant to talk about them with either their partners or their doctors.  The good news is that , with a little guidance and support, embarrassment and the reluctance to talk honestly about sexual feelings and desires can be overcome.  Often ,when couples feel safe with one another and begin to share their real feelings about sex, not only does their sex life improve but their sense of intimacy and closeness deepens.

Boredom and Taking your Partner for Granted.  Over time  many married  people tend to take their partners for granted and stop trying when it comes to romance or sex. They don’t realize that frequent expressions of love and romance are necessary to keep the fires of passion burning brightly.  Without some intentional effort to make their partner feel attractive , appreciated and special  sex may become simply hum drum and just too much trouble to be worth it.   Put another way, sex in marriage is like a garden. Without romantic tending all you wind up with is bugs and weeds.  Taking time with personal appearance, compliments as well as novel suggestions can rejuvenate  stale or almost non-existent relations.

A Worsening Bad Habit   Finally, most couples who stopped having sex didn’t start out that way. For many it was something that had just become more and more infrequent to the point that it stopped altogether. And here is the thing: the longer the time between having sex happens,  the more difficult initiating sex becomes.  For a lot of couples the difficulty of letting their partner know that they were interested became so great that they just gave up trying altogether.  In these kinds of circumstances, a therapist can help couples to communicate honestly and reassure them that it is never too late to turn things around and get back into the swing of things sexually.

Whatever the reason that married people are not having sex, let me say again, there is good news. Sex in marriage  is like water that flows through a hose. Sometimes the hose gets kinked up and the flow stops. With professional treatment, however, most blockages can be unkinked and romance can flow again.

The first step to fixing the problem, however, is to acknowledge it.  A couple needs to be able to recognize the situation and get help. Left untreated, an asexual marriage will not spontaneously get better. It, likely, will only get worse.  With the help of a trained professional, however, partners can learn how to resolve the obstacles that block their desire and passion can be rediscovered.  Even though its been a long time, and you worry how thing wills go, remember that having sex is like riding a bicycle.  You never forget how.  If you and your partner have been having a problem in the bedroom, don’t wait any longer. Even though you may feel discouraged, give it a shot and call now.