Do you have to be “crazy” to see a therapist ? 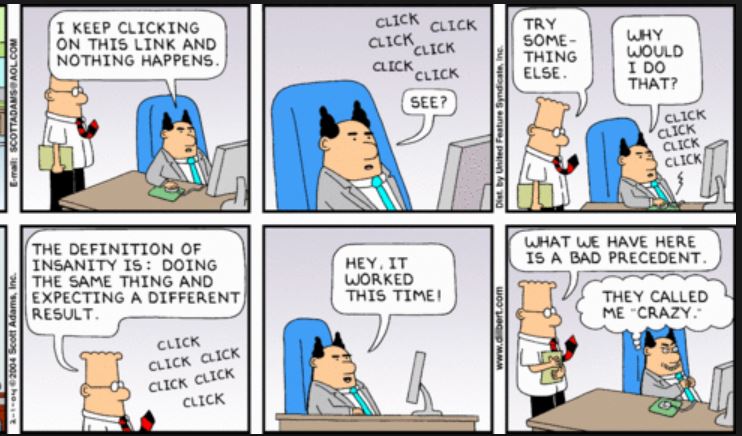 What comes to mind when you hear the word crazy ?   It’s a term we hear or use every day.  For some, it’s just another word for being illogical  or irrational.  For others it is a scary pronouncement about a severe and unchangeable mental condition.  For some others it is an outdated and offensive way to reference psychological problems. This confusion reveals that it is time to update our assumptions about mental health and illness.

Although the word crazy originally meant something which was full of cracks, it has come to mean someone with a mental disorder.  And here is the problem: While it was a major step forward to see psychological problems as an illness  rather than a curse or state of demonic possession , we now recognize that the medical model of the time (i.e. which understood illness in black and white terms: either one was healthy or sick.)  was grossly misleading and inaccurate.

Unfortunately, although our modern understanding of physical illness has progressed and we now understand health and illness as being on a continuum, our thoughts about psychiatric disorders lags behind.  Continuing to understand mental disorders as separate from normal experience not only distorts their reality but creates unnecessary fear and stigma.

Again, for many folks, mental illness raises grim 19th century images of insane asylums where untreatable patients were locked away from society in facilities which were much like prisons.  The notion of being crazy or insane meant that one was permanently deranged and radically different from a normal person.  Likewise, a stigma arose that anyone who saw a therapist meant that s/he must be crazy.

It is important to understand that the distinction between being mentally healthy and  disordered are relative and not absolute .  And here is the thing which is vitally important to understand: No one is completely rational or logical, i.e. sane.  We all have distortions in our perceptions of our self and the world. Likewise, no one is completely healthy in the way they respond to the challenges of life.  We all have our irrational quirks, i.e . we all are a little bit crazy.

The critical distinction between being healthy and disordered has to do with the relative impairment or disruption  a person’s distortion creates in his or her life.  Thus, to answer the original question, ( Do you have to be crazy to see a therapist?) it depends on what you mean by crazy.   If crazy means having an emotional problem, then, yes. People see counselors for specific reasons.  But, since we’re all a little bit crazy, seeing a therapist should be no different than going to the dentist.  It is a judgment call.  Each person decides if the irrational aspect of his/her life is intrusive/disabling enough to seek help.

On the other hand, if what it meant by  the word crazy is having a severe psychological problem, the answer is no.   Sometimes, I’m asked if it’s okay to use the word crazy and I think that it is.  I think we need to use it to mean those chunks of irrational behavior that we all have.  (e.g. When I saw the sale, I went crazy and bought three pairs of shoes.)  Even regarding more serious issues like becoming angry and “losing it” we need to understand that most mental problems are intermittent and treatable and  are not a permanent or untreatable condition which requires hospitalization.

If we can update our understanding of psychological disorders, we can take away the fear and stigma of them.   Mental health is not fundamentally different from physical health nor should attitudes regarding seeking help be any different than going to any other kind of doctor.