Communication Tip # 6 : Understanding the Differences between Thinkers and Feelers 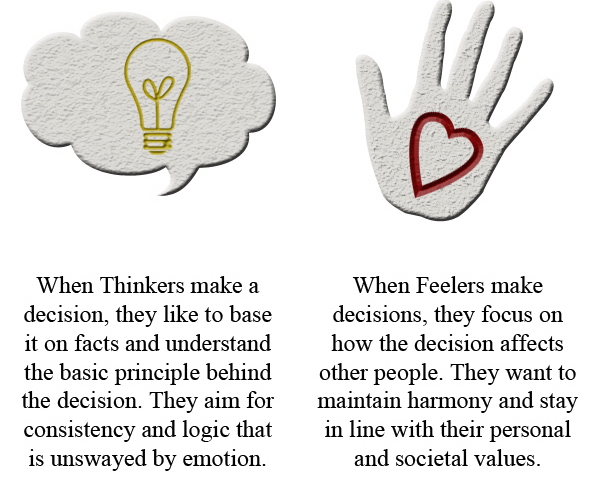 In continuing our theme of improving communication skills, we come to the third axis of the Myers-Briggs Personality Type Indicator scheme: Thinking (T) and Feeling (F).  T/F is the only indicator in which gender seems to be determinative.  75%  of men are Ts and 75% of women are Fs.

Thinkers are concerned with being accurate and getting things right.  The facts are their first priority and, thus, Ts are not afraid to debate or argue a point which they feel is important.

Feelers, on the other hand are empathic and are sensitive to the impact of a statement or position has on others. Their concern is for the feelings of others and that folks can get along.

For example, at a party two guys may get into it over who was a better ball player and argue strenuously, while all the while, their wives may be rolling their eyes, concerned that their debate may spoil the party for everyone else.

Sometimes accuracy is absolutely necessary and sometimes it is not.   Good communicators are able to discuss the relative significance and what is most needed in the moment, i.e.  either struggling over a point to be right or letting it go to get along.

Frustrating conflicts are more easily resolved when the underlying conflict between a T’s and F’s perspective is acknowledged and understood.  It is important that each perspective be respected before a calming solution can be found.