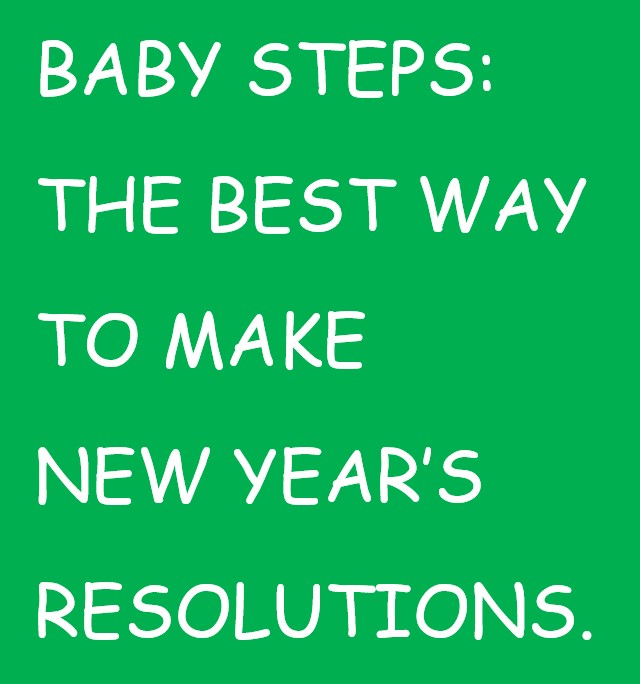 As we head toward the last week in January, it is important to realize that it is not too late to think about new year’s resolutions and deciding to make important changes and improvements in your life.   You know, things like losing weight, exercising more, not smoking and cutting down on drinking. Sadly however, despite good intentions, many have trouble carrying through with their plans and are unable to achieve their goals. Fortunately, there are things that one can do to improve one’s chances of succeeding. Specifically, Baby Steps is an excellent alternative to all or nothing thinking when trying to make life changes.

One of the reasons people fail is that they fall victim to “all or nothing” thinking.  Basically, the all or nothing trap is an outlook which begins with an exceptionally large and often an unrealistic goal.  When immediate results are not accomplished, the person, rather than adjusting his/her expectations or changing her/his approach, gives up and stops trying altogether.

For example, someone who wants to lose 20 pounds and starts  a new diet which promises drastic weight loss quickly may get discouraged if they are unable to stick to the diet or if the weight does not come off as  swiftly as promised.  Discouraged, the individual may not only abandon their diet but also binge eat to soothe themselves. As a result of their discouragement, they may actually gain weight. In other words, having realistic expectations is very important because unreasonable ones can be counter productive.

Those seeking psychological help often make the same kind of mistakes.  Unrealistic hopes, when not quickly fulfilled, can often result in discouragement and a premature termination of the therapy process or not even being able to make the initial call for help.

Fortunately, there is a helpful alternative to all or nothing thinking.   A good example of this approach  is found in the 1984 comedy, What about Bob,  in which Richard Dreyfus  played a psychiatrist  who wrote a book called “Baby Steps”.  Baby steps is another way of describing a therapeutic approach to making changes that psychologists refer to as progressive approximation. From this point of view, it is assumed that most meaningful change does not occur in one giant leap but, instead, takes place gradually and incrementally as the result of having taken many small steps.  With that outlook in mind, here are some basic tips to help you with your new year’s resolutions:

1) Make a Realistic Assessment of the nature and complexity of the change you are considering.  Successful change is rarely accomplished through reason alone.  For example, how long or deeply ingrained is the behavior you are trying to change?  It is a lot easier to change something that you have just begun than something which you have been doing for years.  Likewise, in addition to how long the unwanted behavior has been a problem, the psychological function of the activity needs to be understood.  For  the individual who is trying to lose weight, the emotional connection to food must also be fully understood.  For example, many folks eat to calm anxiety.  Thus, for that type of person to not only lose but keep the weight off, in addition to reducing calories, they must also find an effective alternative to lower anxiety.

2) Consider the Timing. Given all of the factors in your current life  situation, ask yourself,  is this a good time to make a major change ?  Although it is common for folks to have the impulse to  to make an important change while one is overwhelmed with other stressors or challenges, actually attempting it may not be a good idea and may make succeeding less likely.

3)  Break the ultimate goal down into its component parts.   After understanding all of the steps which are needed to accomplish your goal, think about each of the individual steps and ask yourself , is it doable?  If not “cut it in half” and ask yourself again. Keep asking and cutting down until you are confident that you can do the step successfully.  For example, a person who wanted to overcome her fear of snakes was stuck not knowing even where to begin because her terror was so great.  In this case, even beginning the task needed to be modified several times.  At first, it was proposed to go to a pet store to see a snake but that was too much. Suggesting less stressful steps continued, like driving by a pet store, looking at a picture of a snake on the internet until finally looking at the word “snake” was selected as a first step. It is important to remember that if a task feels too hard, don’t attempt it.  “Break” the goal down into simpler and simpler steps until you are positive that it can be done.

4) Have a detailed plan that tells you the sequence of needed steps to be taken and what resources  that will be needed.  Most change is not made by a single effort or all by oneself. Successful change comes as the result of consistently carrying through with a plan and having help. Taking stock of the resources and support you have or will need is crucial for making life changes. If elements are lacking , part of your plan will include how to get the extra help you need. Extra help may be things like talking to folks who have successfully made the changes you want to make.

5) Think Carefully: Are my expectations for change reasonable?    Before undertaking a major change, it is important to consider if your expectations for the process are realistic.  For most people, starting or stopping a new behavior is not an even or smooth progression. It involves success and set backs, fits and starts and it is important not to become discouraged or give up when problems are encountered.   It is important to keep in mind that most  successes take longer than initially anticipated to accomplish.  Likewise, no matter how well planned, change usually involves running into unexpected  obstacles. Having realistic expectations about the process of change will help you to cut yourself some slack  and boost your confidence to keep going and succeed.

The start of a new year is a good time to consider and think about how you would like to improve your life.  Carefully planning and taking into consideration the fundamental elements of change rather than acting impulsively will increase your odds of success.