Myth of Androgyne and the Human Longing for Comepleteness 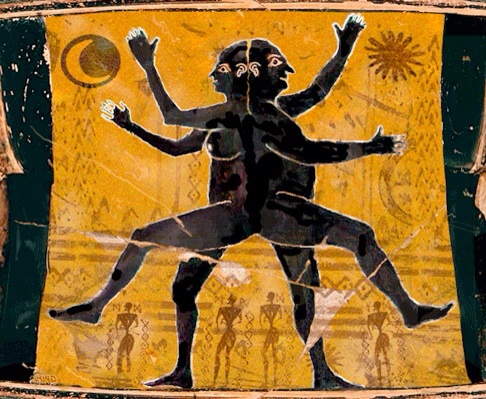 As Valentine’s Day approaches, our thoughts turn to love.  Of course there are many kinds of love : The love of a parent for a child or a child for a parent;  the love between brothers and sisters ; the love for family and friends.  Romantic love, however, is the most mysterious of all.  It is complex and made up of  many parts.

The Greeks understood love (eros) as a passionate feeling and sensational impulse for sexual union. Christians spoke of a selfless love for others (agape)   While we often think of love in terms of positive or passionate feelings, there is another kind of love which goes beyond the altruistic or sensual realms.  Aristotle likened this transcendent dimension to one soul which inhabits two bodies.   Aristophanes tells a story of androgyne in Plato’s Symposium which explains the soul’s deep longing for union.http://www.anselm.edu/homepage/dbanach/sym.htm

According to Aristophanes, originally there were three kinds of people: men women and men-women. (androgyne).  The shape of the androgynous people (Pictured above) was curious. Each person had two faces, four arms and four legs and  two sets of genitals.   As the story goes, as punishment for their rebellion,  Zeus ordered that  the androgynous people be split in two.   As a result, the soul of androgynous person experienced a terrible loss and sought toreunite with his lost half to become whole again.  This longing for a missing part and to be whole again expresses the deep longing of romantic love.

The notion of a primal separation is central to our understanding of human nature in the Judeo- Christian and Islamic thinking.  Specifically, the metaphor is about humans being separated from God’s love.  This dilemma is conveyed in the Garden of Eden myth.  Adam and Eve being driven from the garden and away from God’s grace provides the context for Christian redemption which is the healing of the rift between human kind and God.  God’s love makes this reunion possible.    Much like  Aristophanes’ understanding,  the Biblical notion of love is not a sexual feeling or passion but a force for primordial reunion.

While modern culture is pretty much bereft of either Greek mythology or even Old Testament notions of estrangement, we still find vestiges of these ancient myths.  Although we still use the word androgyny, it has nothing to do Aristophanes’ third sex.  It has come to mean an appearance which combines both male and female characteristics or is gender ambiguous.  Nonetheless, we hear echoes from the past in romantic clichés such as  “you complete me” or when one spouse refers to the other as his/her “other half”.

Likewise, the Valentine’s Day heart, is much more than a catchy logo.  The universal symbol for love expresses emotion. Love is not a rational experience. It is not a thing of logical deduction.  Love is a feeling which transcends thought and as springs from the depths of one’s soul.

While it is not popular, to think of oneself as incomplete or as needing another person to be fulfilled, there is, nonetheless, a primal loneliness which overshadows our defiant attempts to assert our individual independence and autonomy.  At some deeper level, we celebrate Valentine’s Day as both an affirmation of our need for love and the overwhelming joy finding it brings.  I hope for your Valentines’ Day to be a celebration of the gift of love.